Every town has its firsts: the first baby born, the first death, the first editorial shaming of a woman for riding her horse through town in inappropriate dress (see news clipping). The firsts of many towns and cities are mired in the haze of pre-history, when no one thought to make a note about the first marriage in town or the first mailman bit by a dog. The firsts of other towns are far too recent to be of interest to anyone (first strip mall? Yawn). The towns of Mesa County are not too old and not too young, giving us a sweet spot of firsts that our newspapers lay bare with just a bit of research. While some of our firsts might not be very exciting (first irrigation ditch? Important, but not so thrilling), they belong to us. So in no particular order, here are some Firsts gleaned from the annals of the Grand Junction News, Grand Junction’s first newspaper.

Clayton Nichols staked the first ranch and Charles Brett built the first cabin in the autumn of 1881, stampeding in with other settlers, hot on the heels of the forcefully removed Utes.

While we can’t be certain of its primacy, the first jailbreak appears to have been achieved by an unnamed man who was being held for the theft of a gun and other items from the tent of one Mr. Fitzpatrick. In late October or early November 1882, he burned a hole in the wall of the “Calaboose,” but was caught and chained to the floor.  With some help, he escaped his chains and climbed through the hole. 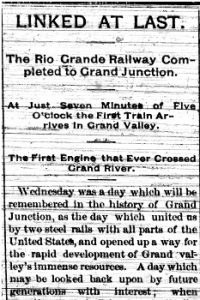 On November 22, 1882, George Crawford rode on the first train to arrive in the Grand Valley. “At just seven minutes of five o’clock” pm, the train came over the original, wooden railroad bridge that crossed the Colorado River near the confluence. Grand Junction was then linked to the world on a line that would eventually connect Denver and Salt Lake City.

The first churches in the Grand Valley were organized and built by emissaries of the Methodist Episcopal Church South and The Baptist Church in 1883, though preachers preached and Sunday schools taught before that time.

The first publicized shooting in Grand Junction happened at Emma Thompson’s saloon on November 10, 1882. City Marshall Mike Davis, responding to the sound of gunfire in a dispute between a gambler named Sims and a “bad character” named Mike Dunn, shot the fleeing Dunn in the back.

The first sidewalk was laid in front of the Crawford House, a hotel built by Holderby at 4th and Main Streets.

Yup Mow was apparently the first “Chinaman” in Grand Junction (not a very politically correct term nowadays, but that is how the Grand Junction News described him). He invested in real estate. 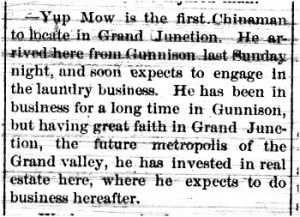 Robinson built the first adobe building on Colorado Avenue. In 1882, Tom Ryan gave “the first performance” in Grand Junction, at the Delta Theater on Colorado Avenue. James George and James Reardon were the first to “prove up on their claims,” in January 1883. Judge Cobb opened the first county court in March 1883. J.C. Kennedy built the “first business block” on 7th Street.

Finally, the first library was first planned on New Year’s Eve of 1882, by a group calling themselves the Grand Junction Library Association. It took many years before the first library finally came about. If you would like to view a microfilm copy of the Grand Junction News, come to the Central Library, where a staff member can direct you. While you’re here, visit our Rashleigh Regional History Room, downstairs.