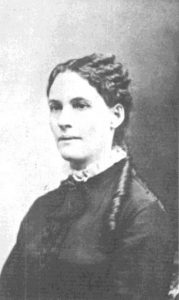 On August 5, 1858, the newly-wed feminist and abolitionist Julia Archibald Holmes was the first woman on record to climb Colorado’s Pikes Peak. With her husband and two others, she began the hike on August 1, clad in an ultra-progressive (and scandalous) bloomer costume, consisting of a knee-length dress worn over full-length pants, accessorized with Indian moccasins.  In a letter to her mother, written at the summit of Pikes Peak, Julia wrote, “Nearly everyone tried to discourage me from attempting it, but I believed I should succeed, and now here I am and I feel that I would not have missed this glorious sight for anything at all.” Her marriage broke up later, due to her husband’s abusive and brutish ways, and Julia and her children moved to Washington, D.C., where she became secretary to National American Woman Suffrage Association and the first woman member of the United States Board of Education. And it all started in Colorado. Here are two books about Julia you will enjoy:

A Bloomer Girl on Pikes Peak by Agnes Wright Spring