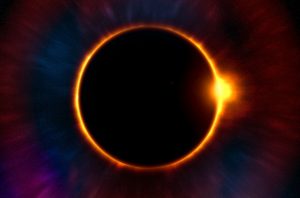 Hey everyone, there’s this super rare natural phenomenon known as a ” total solar eclipse” happening this Monday, August 21! Citizens across the country will be whipping out their fancy eclipse glasses or homemade viewing devices, and hunkering down to enjoy this special natural event.  Here in Grand Junction the event will be viewed as a partial eclipse, with the maximum potential view occurring at 11:40a.m.

If you’re like me, you may have felt a bit scientifically naive about the logistics of the eclipse.  Luckily we can count on those smarty-pants at NASA.com to explain things quite nicely:

“Sometimes when the moon orbits Earth, it moves between the sun and Earth. When this happens, the moon blocks the light of the sun from reaching Earth. During a solar eclipse, the moon casts a shadow onto Earth. For a total eclipse to take place, the sun, moon and Earth must be in a direct line.”

Just like that, an awe-inspiring, once in a lifetime event occurs.  This event proves so majestic to some, they dedicate their lives to the thrill of “eclipse chasing.” Frank Close’s 2017 book, “Eclipse: Journeys to the Dark Side of the Moon”, offers a glimpse into the lives of solar and lunar eclipse chasers who race to unique worldwide destinations for ultimate views of the special visual occurrence.

The history of eclipses is vast in beliefs and folklore.  According to NASA.com’s Eclipse 101 page, ancient Chinese civilizations believed a solar eclipse was caused by a hungry, sun-eating celestial dragon.  The Greek poet Archilochus stated that Zeus, the supreme god of the Olympians, created “night during mid-day” to induce fear in the hearts of men.  If you are interested in reading more about the history and legends of eclipses, check out “Sun Moon Earth: the History of Solar Eclipses from Omens of Doom to Einstein and Exoplanets.”

Be safe out there, humans of Colorado! Protect those peepers and enjoy this unbelievable natural spectacle!