When you utter the word, “detective,” a couple different characters may come to mind: Sherlock Holmes lurking around in his Milford coat with a magnifying glass, or perhaps a group of sleuths who don the motto, “We Never Sleep,” and call themselves the Pinkerton Detective Agency.

According to David Grann in his highly applauded book, “The Killers of the Flower Moon:”

“The term ‘to detect’ derived from the Latin verb ‘to unroof,’ and because the devil, according to legend, allowed his henchmen to peer voyeuristically into houses by removing their roofs, detectives were known as ‘the devil’s disciples.’”

A section of “The Killers of the Flower Moon”  explains how it was difficult in the early 1900’s for the general public to receive solid help from government officials when crimes were committed against them.  On many occasions, if people wanted a crime solved, they would take matters into their own hands and hire a private detective. The private detective scene was popular back in the day, as many landowners, farmers, and tradesman needed to protect their commodities from theft. The government also utilized these detectives to help solve mysteries in hard-to-reach places such as western cattle ranches or Native American reservations.

For a short time in the early 1900’s, Mesa County resident Dr. Everett H. Munro worked as a detective under the disguise of a cowboy.

Everett was an interviewee of the Mesa County Oral History Project.  While attending his senior year at Colorado College, Everett’s father died and he was forced to leave and help with his family’s dire financial situation.  He dropped out of school and was offered a job as a U.S. Deputy stock detective.  During this time, he had to operate secretly under the guise of a cowboy and join the cattle round-up at the Crow Indian Reservation in Montana.  His main job was to keep a watchful eye over the operation and to catch any thieves attempting to steal beef.

“I was instructed not to give away the fact that I had a commission as a detective but to temporarily, at least, jump in and take my part as one of the cowboys.  There had been a great deal of stealing cattle and running the wrong brand on big calves. There was also quite a good deal of trouble about various employees of the government bringing in liquor which they traded or sold to the Indians for horses and other commodities.” – Dr. Everett H. Munro

The life of a detective may seem flashy and intoxicating, but it came with its moments of struggle. 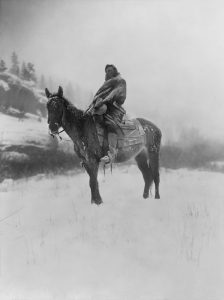 Everett had little experience working with cowboys and wrangling cattle, and his first chunk of time spent under disguise did not go as smoothly as planned.  He began chopping wood for the camp because he didn’t know what to do with himself, completing someone else’s chore in the process and looking like a bit of a fool.  He rounded up cattle only to lead them a few miles in the wrong direction of the check-in point, missing his day’s meals and showing up late and red-faced. After a matter of time he settled in, and finally made a bust – two Native Americans had been stealing beef and burying it in a pit under the floor of their teepee.

It soon became apparent that Everett was not a normal, bronco-riding, rope-lassoing cowboy on the range.  He received his paychecks in the mail, while other cowboys were paid directly by the foreman. His less than proficient cowboy skills made his status as an outsider even more obvious.  He often felt shunned when he went into the town bar, and had to work hard to convince his fellow man that he was more of a cohort than a spy.

Despite his somewhat awkward presence, Everett managed to successfully navigate through his brief detective career while camping out on the Montana Big Horn range during harsh, -26 degree Fahrenheit winters.  He eventually made friends during his assignment, often with members of the Crow tribe in Crow Agency, Montana. The Crow Agency Hospital housed a doctor named Dr. Posey, a wild young man who mentored Everett on his journey to becoming a doctor himself.  Dr. Posey taught him how to administer anesthesia and let him sit in on surgeries, well before he had acquired any official educational training.

On top of a brief career as a detective, Dr. Munro had a lengthy, full life in Mesa County with many accomplishments under his belt.  He was a well-renowned surgeon, the City Health Officer for Grand Junction in 1922, and organized the Cancer Society in Mesa County.

Feel free to visit the Mesa County Oral History Project and learn more about the interesting and full life of Dr. Munro.