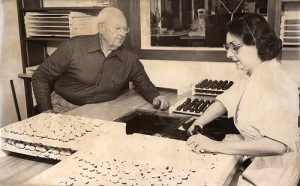 Chet Enstrom. Photo from the Museums of Western Colorado.

People in the Grand Valley know Chet Enstrom for his delicious almond toffee, still sold by Enstrom Candies. But did you know that he started his career as an ice cream maker? In his interview with the Mesa County Oral History Project, Enstrom describes how he became involved in the ice cream business.

When Enstrom was in his early teens, his father, a tubercular patient who had moved to Colorado Springs for the drier air, passed away. To support his family, Enstrom went to work for Bartell’s Confectionary, making ice cream. When the ice cream business was slow in the winter, he worked in the candy shop, cleaning and helping with candy making. Of this time he says, “I watched and when [the candy maker] weighed something I’d see the thermometer. I had good eyes and literally stole the candy trade from him in the wintertime.” The candy maker trusted Enstrom enough that he allowed him to both run a new candy store in West Colorado Springs and supervise ice cream making.

In 1929, Enstrom moved to Grand Junction and became a partner in an existing company, the Velvet Ice Cream Company. With Enstrom’s extensive knowledge, they improved the ice cream and made a good, popular product. When his partners began using cheaper ingredients, Enstrom bowed out and the company was sold. In 1960, he began making and selling the toffee for which he is now famous. 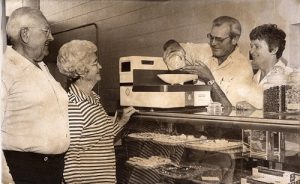 Chet Enstrom. Photo from the Museums of Western Colorado.

In his later life, Enstrom sold his company to his son so that he could concentrate on his political career in the Colorado State Senate. Enstrom became a state senator despite lacking a high school diploma, which he gained finally in 1970. He also served as a Grand Junction City Council member.

Even in retirement, he continued to help the Enstrom company, making hard candies and bemoaning the fact the other candy makers did not seem interested in learning the hard candy trade. He was afraid this knowledge would soon be lost. But at least we have his almond toffee to remember him by!