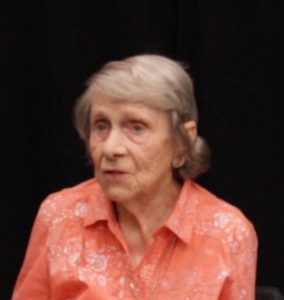 Longtime Mesa County resident Evelyn Kyle turned 100 years old this year, and was honored by the Museums of Western Colorado with the Museum Service Award for her contributions to local history. Now, the Mesa County Oral History Project has recorded a new interview with Evelyn, in which she discusses her life and accomplishments.

In 1975, Anne Saunders, then Curator of Collections at the Museums of Western Colorado, began noticing all of the elderly Western Colorado pioneers and children of pioneers dropping their possessions off at the Museum. Each person seemed to have a story to go along with the items they donated, and she realized that without some quick action, these stories would be lost. So, she submitted a grant application to coincide with the Bicentennial and launched the Mesa County Oral History Project in coordination with Mesa County Libraries in 1976. Shortly after that, she hired Evelyn Kyle as the Oral History Coordinator, a decision Anne describes as one of the best she made at the Museum. Under Evelyn’s direction, the Oral History Project secured many volunteers and recorded interviews with hundreds of local people, creating a treasure trove of local history that is being digitized now.

Evelyn and her husband Jim were also active in community theater. Everywhere they moved, as they followed Jim’s job working for Independent Lumber, they started community theater programs: Cortez, Meeker, Telluride and Grand Junction. In Telluride, they helped start the Telluride Council for Arts & Humanities, now Telluride Arts, and were later honored by the governor for their contributions to the arts. In 1985, after waiting 40 years for the opportunity to get her degree in performing arts, through the Dust Bowl and raising children, Evelyn finally did so at then Mesa College (now Colorado Mesa University). She also served on the board for the Avalon Theater’s renovation and acted and wrote scripts for the Senior Follies.

So listen in and join us in thanking this centenarian who has given much to Grand Junction and other Western Colorado communities.