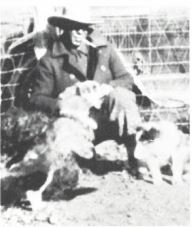 Charlie Glass and his dogs. Photo source: “The Legend of Charlie Glass” by Walker D. Wyman and John D. Hart

According to an article written by Katie Nodjimbadem for Smithsonian.com, “Few images embody the spirit of the American West as well as the trailblazing, sharpshooting, horseback-riding cowboy of American lore. And though African-American cowboys don’t play a part in the popular narrative, historians estimate that one in four cowboys were black.” One such man was Charlie Glass.

If Mesa County had to pick a star cowboy to focus on in the early 1900’s, Charlie Glass would certainly be a top contender. He was known by many residents as a hardworking, likable fellow, and was one of the only well-known Black cowboys in western Colorado during the early 1900’s. He enjoyed participating annually in the Cowpuncher’s Reunion in Fruita, Colorado, steer wrastlin’ and ropin’, and was always a crowd favorite. On a grim note, Glass was also popular because of his involvement in a murder scandal in 1921.

Glass had several jobs around Mesa County, all dealing with cowboy activity such as transporting and wrangling horses, and protecting land for cattlemen. According to Mesa County Oral History interviewees Bernice and George “Vern” Wood, Glass worked for S-Cross Cattle Company on Pinon Mesa protecting their cattle until they went out of business.  He then worked for a fellow named Oscar L. Turner between the Book Cliffs range of Colorado and Cisco, Utah as the foreman of his cattle ranch.

“The Legend of Charlie Glass” by Walker D. Wyman and John D. Hart explains that while working for Turner, Glass had a dramatic runin with a Basque sheepherder named Felix Jesui whose flock was encroaching on Turner’s property.  This was during the Sheep Wars era, so there was a great deal of contention between sheepherders and cattlemen. A shootout took place between the two men in which Jesui was killed. Glass admitted the crime and said he acted in selfdefense, but he was sent to jail, his bail set at $10,000 (that’s equivalent to $127,000 today). Turner quickly paid his bail in full with no expectations of repayment.

A largely attended court case took place in Moab, Utah, to dispute the crime. Glass was acquitted on all counts and continued to work for Turner for sixteen more years. During that 16th and final year of 1937, Glass decided to go out and gamble his work wages one night during a game of poker in Sego, Utah.  His opponents, coincidentally, were the Basque cousins of the deceased sheepherder Jesui. They drank a great deal and all seemed to be in good spirits when they drove off together to leave the game.

A couple hours later, Glass was found dead in the back of the men’s pickup truck with a broken neck. The men claimed the truck veered off the road and rolled several times, but Glass’s unsettling death spurred rumors around the area.  Some folks believed the accident was no accident at all, but revenge for the sheepherders’ dead cousin. The true happenings of that fateful night were never revealed.

The loss of Charlie Glass was mourned throughout our little pocket of the west. All that’s left of old Charlie now is a lonesome grave in Fruita, Colorado; Charlie was the first Black citizen to be buried in the Fruita Cemetery. 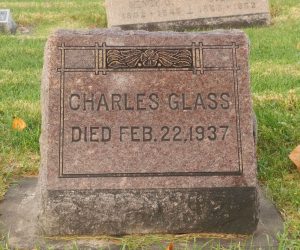 Was a cowpoke, boys, who had a lot of class.

Though he’s passed the Great Divide

All the cowmen speak with pride

‘Bout the cowpoke that they knew as Charlie Glass.”

-“The Ballad of Charlie Glass” by William Leslie Clark