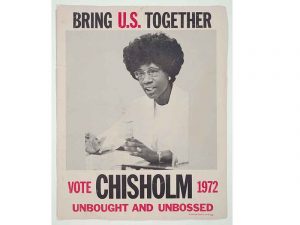 “Fighting Shirley Chisholm” was the first black woman elected to Congress, in 1968. She was born in Brooklyn, N.Y. in 1924 to a Guyanan father and Barbadian mother, and spent part of her childhood in Barbados on her grandmother’s farm, receiving a traditional, strict British education. She received an MA in elementary education and was considered an authority on child welfare issues and early education. When she became a member of the New York State Assembly in 1964, she said, “If they don’t give you a seat at the table, bring a folding chair.”

Her trailblazing run for the presidency in 1972 received little support from feminists or minorities. She went to the Democratic National Convention with 152 delegates, more than her rivals Hubert Humphrey or Edmund Muskie.  When the racist Alabama governor George Wallace was shot five times and paralyzed in 1972, Chisholm put aside their differences and visited him in the hospital, which caused controversy among her supporters. Her friendship with Wallace paid off two years later when she was trying to pass a bill giving domestic workers the minimum wage and Wallace gathered enough votes from southern states to pass the bill.

Her energy, pragmatism, and activism earned praise from the Rev. Jesse Jackson, who said, “She was a woman of great courage,” and, “She refused to accept the ordinary, and she had high expectations for herself and all people around her.” She wanted her legacy to be, “I’d like them to say that Shirley Chisholm had guts. That’s how I’d like to be remembered.”