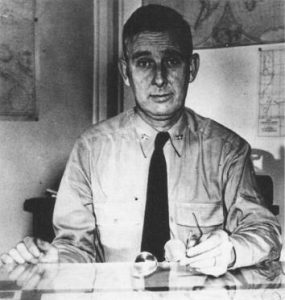 Elvin Urquhart was a code breaker who helped the United States Navy break the Japanese Navy General Operational Code, or JN25, during World War II. Captain Joseph Rochefort handpicked Urquhart to be part of Station Hypo, a code breaking unit of the U.S. Office of Naval Intelligence based in Pearl Harbor. In an interview with the Mesa County Oral History Project, Urquhart talks about how Station Hypo broke the code and helped turn the tide of the war for the United States.

After the surprise attack on Pearl Harbor and the Battle of the Coral Sea (May 1942), the United States Navy was left with a decimated force. At the Battle of Midway (June 1942), the Japanese committed a large force, hoping to overwhelm the smaller American fleet. The Americans, however, aided by Urquhart’s intelligence division, were able to turn the tables on the Japanese.

The Japanese Navy planned to ambush the Americans in the Battle of Midway, but because American cryptographers were able to determine the logistics of the planned attack, the Americans could plan an effective ambush of their own. As a result, the outnumbered American Navy defeated the Japanese and helped the Americans gain advantage in World War II.