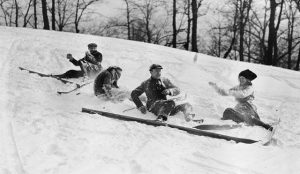 Carl Howelsen came to Steamboat Springs from Norway in 1913 and spread his love of skiing and ski jumping. The town memorialized his important contribution to local skiing by naming their municipal ski area after him. Howelsen may have pioneered skiing in the Steamboat Springs area, but who actually built the first ski runs there? According to Mesa County Oral History Project interviewee Edna (Monson) Brenton (longtime Steamboat resident from a pioneering family), her husband Jessie L. Benton built the first three runs on the mountain. He was a farmer but also a part-time heavy machinery operator for Routt County, and plowed the runs with an earthmover.

The Grand Mesa got skiing a little later than Steamboat Springs. Town of Mesa resident Carl Forsman reports in his oral history interview that some time in the 1930’s, Roy, Edith and Russell Sisac formed the Grand Mesa Ski Club with ski crazy friends (the audio for this portion of Forsman’s interview did not, unfortunately, make it into our online archive). Previous to the ski club, the Sisacs had founded a small ski area near the Mesa Lakes called the Mesa Lakes Ski Run. Friends such as Lillian and Russel Paige helped the Sisacs put up ropes and rope tows at the old ford crossing on Mesa Creek.