In early Mesa County, first there was the fruit boom, then came uranium.

The Grand Valley experienced an explosion of activity like no other in the 1940’s when it became “The Uranium Capitol of the World.” Unbeknownst to me before listening to Wayne Farley’s Mesa County Oral History Project interview, the Manhattan Project was a research and development project during World War II that put Mesa County at the heart of the Uranium Boom.  The government was racing to invent the world’s first nuclear bomb, and uranium was a necessary ingredient.  The Colorado Plateau turned out to be chock-full of the stuff, hence becoming the chosen location of the Department of Energy’s Atomic Energy Commission (AEC) at 2591 Legacy Way in Grand Junction, Colorado.  The AEC property was acquired in 1943 by the federal government and used as a refinery to concentrate uranium oxide from 1943 to 1945 during the years of the Manhattan Project’s existence. 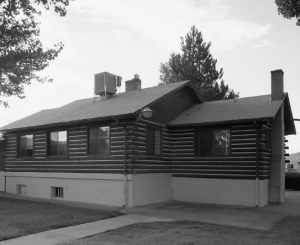 The Grand Junction AEC office location was carefully chosen by Major Philip. C. Leahy, the head of the Manhattan Project’s domestic uranium procurement program.  He appreciated the area for its employee housing opportunities, ease of transportation due to the help of the D&G Railroad, and close proximity to the Gunnison River and mining opportunities scattered around the Colorado Plateau.

Wayne Farley moved to the Grand Valley from Gerber, Michigan, and received a geophysical engineering degree.  He became a senior staff geoscientist who lived in the Mesa County and worked in the Department of Energy building off the Gunnison River during the time of the Uranium Boom. Wayne explained how it was Grand Junction’s job to evaluate the potential of uranium for the entire U.S. as a dependable energy resource.  There were multiple ways to explore for uranium – geological studies, airborne surveys, and barometric surveys, to name a few.  Wayne explored the Grand Valley by aircraft – primarily helicopters and fixed wing DC-3 planes flying at approximately 400 feet above the ground, scouting for promising anomalies or clear signs of ore.

The Grand Valley region was alive with people just like Wayne who wanted to have a go at the uranium frenzy. According to an exerpt from local author Al Look’s 1955 book “U-Boom“:

“One of the important jobs of the AEC is to obtain the raw materials, and for this purpose the high-fenced compound of the Operations office of the Division of Raw Materials of the Atomic Energy Commission at Grand Junction is the nerve center of the uranium rush…With a start of eleven employees in 1947, now more than fourteen hundred AEC and contractor employees work out of the Grand Junction office, surveying, geologizing, analyzing, bookkeeping, managing, explaining and answering questions about uranium and how to find it.”

Mesa County was, indeed, a hot bed of activity for uranium miners and the AEC was in the thick of it.

During the 1950’s the AEC compound was used to test experimental uranium ore milling techniques. As explained in a fact sheet created by the Department of Energy, approximately 30,000 tons of ore were processed before milling operations ceased in 1958.  Uranium processing operations ceased at the office in 1974 when the federal government stopped purchasing domestic uranium for Cold War weapons efforts.

Part of the Grand Junction AEC compound still stands today.  The small pine-log cabin used as the headquarters is by not overly impressive from the outside, but due to its important role as the command post during the Manhattan Project, it has been placed on the National Historic Registry.  On June 6, 2019, the old log cabin became an interpretive site and museum known as the Atomic Legacy Cabin.  To learn more about this fascinating time in our county’s history, you can visit the museum on Tuesdays from 9 a.m. to noon, Wednesdays from 10 a.m. to 1 p.m., and on Thursdays from 1 p.m. to 4 p.m.