The foggy streets of literary London have always been plagued by spies, secret agents and other such shadowy folk. From James Bond to Sherlock Holmes, servants of the crown have been fighting the good fight against evil since that first cup of proper tea was made. Over time the formula has gotten a bit old, a bit predictable and, like the aging master of espionage, it has lost its edge. That is to say, until Daniel O’Malley wrote “The Rook”.

Our modern noir begins with a woman waking up in a park in central London, with no memory of her identity and surrounded by bodies wearing latex gloves. She finds a letter in her pocket simply addressed “To You” which informs her that she is Myfanwy Thomas. Now Miss Myfanwy Thomas (Myfanwy rhyming with Tiffany) is part of a top secret government organization tasked with combating the supernatural forces of evil in Great Britain. This comes as a surprise to our main character, who begins to identify her current self as Myfanwy and her previous self as Thomas, since that sounds completely insane. Then again, she did mysteriously lose her memories and may have unnatural powers all her own…

The story follows Myfanwy as she begins impersonating her previous self within this organization to learn who or what caused her memory loss. This brings her up against some classic monsters but also some never before put down in writing. I have read a crazy amount of sci-fi and fantasy and this is the first time I’ve ever heard of a super powered character who is one consciousness in four bodies. O’Malley writes a quirky and fascinating thriller with all the best parts of the spy genre mixed in with his own new flavor of urban fantasy.

Now is the perfect time to read “The Rook” as Starz just began airing a miniseries based on the first book featuring some big name actors like James D’Arcy and Olivia Munn. And if books alone are your thing, there is a sequel called “Stiletto” to keep you busy after “The Rook”! 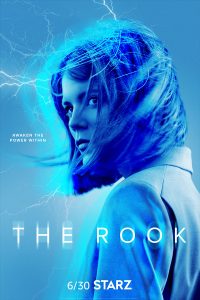