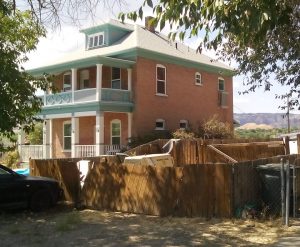 A home in the Riverside neighborhood of Grand Junction, Colorado.

There are many unincorporated areas in Mesa County, echoes of old place names that exist for most people as amorphous blobs upon the map without clear boundary delineation. I can tell people I grew up in Clifton, but what does that really mean, aside from a designated census area, a mailing zip code of 81520, and certain, uninformed opinions that people who never lived in Clifton feel free to provide about the area?

If you grew up in the Grand Valley or have lived here long enough, you will know that Clifton centers roughly around 32 Road, and that old town Clifton consists of the buildings and homes along the old highway near Clifton Elementary School. But did you know that there’s a rural Clifton with orchards around 33 and 34 Roads, or that pockets of hobby farms still exist on D ½ and E Roads, an echo of Clifton’s agricultural past?

But then there’s Pear Park and the old Pear Park School. The building sits right next to Chatfield Elementary School, which I’ve always thought of as part of Clifton. So is it Pear Park or Clifton? I’m confused. In any case, I miss the cows that used to moo between every subdivision. The cows didn’t care if they were in Clifton or Pear Park.

People might have an inkling that Fruitvale centers around 30 Road where North Avenue begins, but did you know that Fruitvale was covered with, well, fruit? Fruitvale had its own high school, school district and social clubs, including the Fruitvale Lions. Schoening’s Platform, a rail fruit loading station at 30 Road, hosted band concerts and dances, making Fruitvale a foot-stomping place to be here in our dusty ole cow town.

And who has heard of the Hunter District? The area around J and 21 Roads was settled by the parents of J.B. Hunter in the early 1880s, and the land took on his moniker. There was even a Hunter School, and the Interurban rail line had a Hunter District stop on its way from Fruita to Grand Junction.

Cleveland was a twin city to Fruita, and the two settlements had quite a sibling rivalry. The St. Malachy Catholic Church’s original building was in Cleveland at 735 E. Harrison Avenue (to give an idea of the town’s location). Cleveland apparently had its own post office and laws. During prohibition, one town was wet and one was dry, although I can’t remember now which was which. In any case, Fruita won the rivalry, and what was then Cleveland is now part of Fruita. 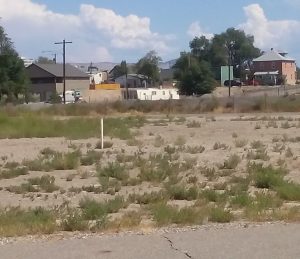 A view of the Riverside neighborhood from near the Colorado River.

Did you know that Riverside was first known as the Crawford Addition? Grand Junction co-founder J.A.K. Crawford (and not George Crawford) had a brick factory in the area, platted the streets, and helped build one of Grand Junction’s earliest neighborhoods.

Or how about the Redlands short lived agricultural past? Ranchers in Glade Park and Pinon Mesa did use the Redlands for winter pasture for their cattle, but it was not until 1905 that civil engineer E.L. Morse surveyed the land. Farmers soon moved in, but subdivisions supplanted them in relatively short order. A few farms still exist.

Appleton had its own cannery. The Teller Indian School was located in Pear Park. Whitewater was a major rail shipping point for cattle. Las Colonias got its name for shelters built for migrant workers in the sugar beet fields. Pomona, Loma, Appleton, Mack… Visit our Mesa County Oral History Project to find out about Mesa County’s many settlements and towns.