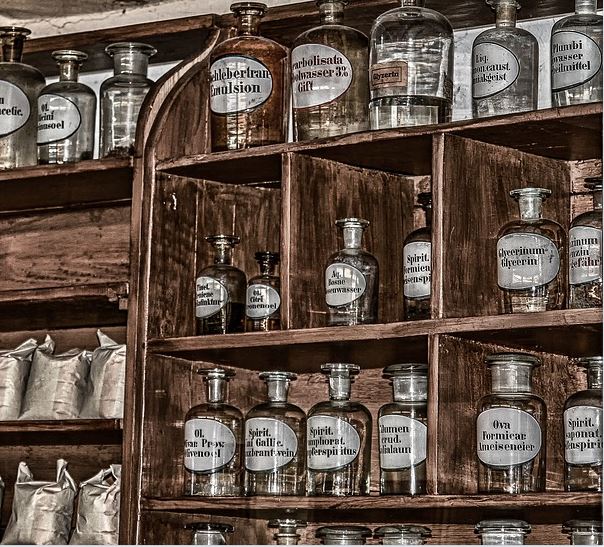 If you’ve seen the classic movie Dumb and Dumber, you may recall a scene in which a policeman calls whiskey “Grandpa’s old cough syrup.”  This famous phrase may have stemmed from parts of the country like Mesa County!

Back in the early days of the Western Slope, there were many remedies for illness or injury that by today’s standards would seem strange, unfounded, or just plain ridiculous. Several questionable methods used by early settlers have been discussed during interviews for the Mesa County Oral History Project. Listed below are a few of my favorite wacky antidotes:

Jim Franklin was a cowboy who worked all over the Grand Valley region breaking and taming wild horses.  According to Jim, when you caught a cold all you needed to do was, “Drink whiskey and eat rock candy.” I wonder if the pharmacist prescribed that as a combo pack?

Glenn McFall was an early Mesa County resident who worked many odd jobs in the area and owned a shoe store on Grand Junction’s Main Street in the 1920’s.  After a nasty spill which broke his arm, Glenn experienced the power of a potion that can cause sudden death by cardiac arrhythmia: he says chloroform was the standard remedy of choice to “help put you to sleep” when faced with a painful injury. If chloroform wasn’t available, the backup anesthetic was often times (surprise!) whiskey.  Nowadays, chloroform is on the United States list of extremely hazardous substances.

The sun is the most valuable energy source, and its powers were once claimed to be a dermatological cure-all. William “Bill” Wallace Cunningham describes a situation in which a friend of his got a peculiar rash:

“…Tracy got a skin rash of some kind. So he came in to Grand Junction and the doctor told him he’d have to expose himself to the sun and the sun would kill the rash. So Tracy went back and took everything off, all he had on was a pair of boots and his spurs and a hat and a pair of shorts. And, of course, in that generation, why, that didn’t look very good, nobody was used…everybody was clothed, especially the cowboys.”

A strong dose of vitamin D and a lack of shame was apparently the recipe for rash removal.

Humans weren’t the only ones who experienced early-day remedies.  According to Howard Shults, a Mesa County resident and member of the Colorado state senate in 1950, historical treatment for horses with Laminitis wasn’t exactly a trot in the park.  Laminitis is a painful foot disease found in horses, some say caused by overfeeding. Treatment in modern times includes antibiotics or discontinuing feeding the animals certain grains.  Howard recalled that in the early 1900’s, “People with horses that’d go lame in the front, they’d bring their horses from all over the country for the Doc to fire them. He’d fire them with a hot iron around the ankles, to cure their lameness.  That’s the way they cured them then – run a hot iron around the ankles.”

Our horses and humans are no doubt grateful for advances in the medical world.