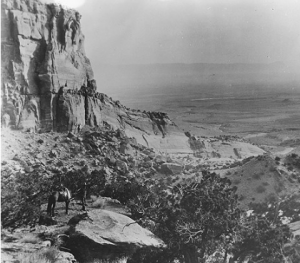 If you’ve lived in Mesa County for a few years or have strolled around the Colorado National Monument more than once, you are most likely familiar with the legendary John Otto.

John Otto was the custodian, founder, and undoubtedly the biggest cheerleader for our beautiful Colorado National Monument, a place of canyons and grandeur that helps put Grand Junction on the outdoor recreation map.

Otto lived within the boundaries of the Monument, camping among the red rocks, Pinyon Pines and Yucca plants. With knowledge of trail building under his belt (a belt donning very few tools for the large scope of his projects), he embarked on tasks that only a true visionary could dream up, creating Otto’s Trail, the Serpent’s Trail, and many other trails that we are still lucky to enjoy today.

John Otto’s efforts were beloved to many of the original pioneers of the area.  He opened their eyes to a new world existing right in their backyard, seen but underappreciated. One of his biggest advocates was Daily Sentinel owner and Editor Walter Walker. As shared in the book John Otto of the Colorado National Monument written by Alan Kania, Walker stated, “…Keep in mind the work this lover of nature, John Otto is doing.  He is asking no credit yet he deserves all.  Single-handed he has opened this great playground to the world.”

Whereas many Mesa County residents appreciated Otto’s efforts, not all of them were the biggest fans. His outspoken viewpoints on worker’s and women’s rights as well as his image as a hermit led some of the more conservative folks to believe he was a bit strange and “cut from the wrong cloth.”

During one particular interview with the Mesa County Oral History Project, Darwin Burford recalls a time when Otto made him so mad he referred to him as a nothing but an “old goat.”

Burford was a sheepherder who would commonly utilize the Liberty Cap Trail, a two-mile trail on the southwest side of the Monument.  On a particular day, he was using the trail to transport corn via a pack of mules to feed his sheep.  Apparently Otto wasn’t too thrilled with Burford’s usage of his trail, so a bit of trouble ensued:

“We looked way down the trail ‘way down below there and here was old John (Otto) out there. He was pryin’ a great big old boulder….about half as big as this table I think..out on the trail to stop us from usin’ the trail. I told this kid that was helpin’ me, I said, “Red, go down there and see if you can stop that old bat from pryin’ that rock out!”. We couldn’t have got by if he’d got that rock out…and he went a-tearin’ off down there before he got that rock out into the trail and persuaded him, got him by the collar and jerked him around a few times and persuaded him that it was better for his health if he’d let this rock go until we got by and come back.” – Darwin Burford

The threatened Otto ceased his rebuttal that day but went forth to write the Department of Interior voicing his displeasure over Burford’s usage of the trail.  Burford went on to tend to his sheep, but the interaction with Otto left a sour taste in his mouth for many years to come.