Anyone who shops at a grocery store during the holidays has seen Salvation Army workers and volunteers standing outside, wearing the telltale red apron and ringing a bell to collect donations for those in need. Early Mesa County resident Nellie (Edwards) Robbins was one of those people, perhaps the longest to ever stick around – she rang the bell in Grand Junction for over 50 years.

Nellie married James Standard when she was seventeen years old in Arkansas and moved to Mesa County to work the fruit harvest in August of 1931 with James and their three children. Her move to the area initially held very little joy.  Thanks in part to the Great Depression years, she lived a life of extreme poverty; her husband was a ramblin’ man with a bad drinking problem, sometimes drinking away whatever meager earnings they had accumulated. They began their Grand Junction experience homeless, sleeping in what Nellie called “a floppy old tent” down by 9th Street and D Road. 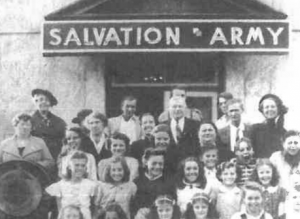 If it weren’t for the Salvation Army, Nellie’s life might have taken a darker turn. Nellie’s daughter wasn’t admitted into school because she lacked shoes.  This became a dose of harsh reality for Nellie, prompting her and the family to turn to the charity for help.  Salvation Army helped her family obtain groceries, shelter, and land back on their feet.  Soon after becoming associated with the organization, Nellie found herself hoping to somehow return their graciousness.

Nellie began ringing the bell for Salvation Army’s Christmas Kettle her first winter in the city. She worked for $1.00 a day and realized she truly enjoyed “mixing with people.”  She worked many jobs for the organization throughout the years, including walking up and down Main Street doing “tambourine collections,” playing the tambourine while asking for charity donations. A 1969 poem by local resident Glenn Berry describes how when Nellie walked into a crowded pool hall with her tambourine, the room “was made cleaner it seemed, by the Blue Bonnet angel and her round tambourine.”  (Read the full poem here). Nellie also joined the Ladies Home League, a branch of the Salvation Army that helped provide services, support, and educational opportunities to women.

Nellie’s husband didn’t want to stay in one place for too long, and they divorced during their first decade in the Grand Valley region. Nellie found herself on her own for ten years, raising her children on Salvation Army wages during these years as a single mother which was undoubtedly a difficult task.  She picked up an odd job at a packing plant for a short while, working hard laborious hours to help feed her children.

Nellie was never truly alone as her involvement with Salvation Army and its people continued to blossom for the following 50 years.  Nellie became a sort of local celebrity because of the organization, and she eventually met a new husband thanks to a friendship formed on the job.  Elsie Robbins was a friend of Nellie’s, and after her death Elsie’s children arranged for Nellie to marry their father, Charlie Robbins.  They had a terrific life together for twenty years. The city of Grand Junction appreciated Nellie’s dedication and positive attitude so greatly that they deemed April 26, 1980 as “Nellie Robbins Day.”

You can listen to Nellie’s uplifting story here, during her 1980 interview available on the Mesa County Oral History Project.