In the early days of Mesa County’s Plateau Valley, specifically the town of Collbran, Colorado, there existed a newspaper called the Plateau Valley Stockman.  The newspaper began in 1901, changed its name to the Plateau Voice in January 1905 until 1929, and lastly went under new ownership and became the Plateau Valley Voice until October 2, 1942. Mesa County Oral History Project interviewee and local author Reuben A. Pitts worked at the Voice starting in 1904 at seventeen years old as a typesetter for his uncle, Editor C.B. Pitts.  C.B. was the publisher of the newspaper from 1901 to 1919.

Reuben worked at the weekly newspaper for two and a half years as a typesetter.  Typesetting by hand was the only way for newspapers to get words on the page before the linotype machine made its way to the Grand Valley region.  Setting type in the early newspaper business was tedious and no easy feat – the tiny letters had to be pieced together one at a time, and attention to detail was of utter importance to avoid typos.  Junior apprentice typesetters back in the day were called “Flunkies” or “Printer Devils.” Reuben wasn’t exactly crazy about his teenage profession: “I handled that type til I hated the looks of it!” Reuben exclaimed during his interview. He remembered only one typesetting accident where he dropped the type mid-job, mixing up the letters and having to start the page all over again. He never repeated that mistake. After his short time working in the newspaper industry, Reuben went into the cattle and livestock business.  Later in life he wrote a couple of books, including his autobiography, presently available to browse in Mesa County Libraries Rashleigh History Room.

Pictured below are a few holiday clippings featured in the Plateau Voice between 1918-1923 compiled from the Colorado History Newspapers database, available on our website for all Mesa County Library cardholders. 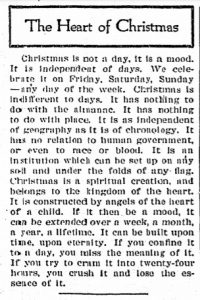 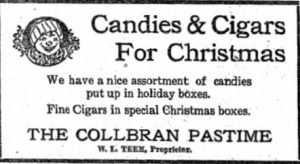 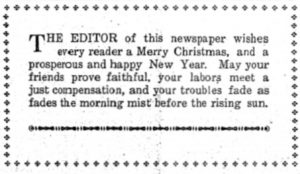 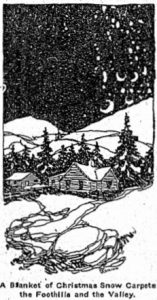