In the dusty heart of the desert near Grand Junction and the Colorado-Utah border lies a little town called Cisco, Utah (last I heard, population: 1).  Current Cisco dwellers are no strangers to isolation, but that hasn’t always been the case. According to long-time rancher William “Bill” Cunningham, one of the earliest settlers of the area, Cisco used to be a far cry from the quiet settlement we recognize today.  It was busy enough at one point to be referred to as a “Boom Town.”

In an interview with the Mesa County Oral History Project, Bill explains moving to Cisco with his parents in 1927 when he was three years old. His father, Wallace Cunningham, was a rancher, and his father before that was (you guessed it) a rancher, so it’s fair to say he was born into the profession. Through family ties to the Turners, a once-prominent family in the area, the Cunninghams fell upon the Cisco Ranch, later called the Cunningham Ranch, and lived there for many years. The Cunningham Ranch was initially co-owned by the Turners and the Cunninghams, but as Bill remembers, “They (The Turners) finally died and it became the Cunningham Ranch just through the use of time, I think. We outlived the rest of them.” 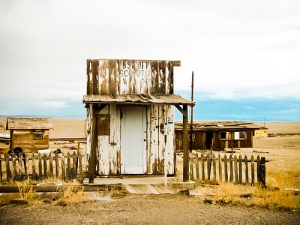 Bill got to know the area well.  He recalled that when water and human interaction became sparse, Cisco was an excellent stopping point for many travelers to resupply before heading elsewhere. The town became alive with travelers and settlers alike.  The water-guzzling steam engines of the Denver and Rio Grande Railroad found Cisco useful for its water reservoir set up behind the town, fed by a pump house from the Colorado River. Sheep herders utilized the long stretches of land nearby to set up winter camp, all while utilizing a staple of civilization: the Cisco Post Office. Bill recalls the post office being ran through the majority of the 1930’s and 1940’s by a widow named Hattie Fuller.

Cisco shared land with the Crystal Carbon Company, an oil company that settled upon the area in the mid 1920’s.  Bill remembers many wells being drilled for oil in the area north of Cisco.  The wells also produced Carbon Black, a form of Carbon that looks like soot, used mainly as a reinforcing filler for automobile tires and other rubber items. The success of the oil company caused many to move to the area, which brought forth the building of a schoolhouse about four miles below the Cunningham Ranch.  The Crystal Carbon Company eventually stopped production causing the workers and their children to abandon the area.  Bill’s father Wallace bought the schoolhouse and transported it on to his ranch property, reusing it as a bunkhouse.  To further push homesteading success in the isolated area of Cisco, Wallace also bought a lease from the government to own one of the gas wells, which is what the family used to heat their home and run generators.

During their time of mid 1900’s Cisco living, the Cunninghams took frequent trips around the area, down to Moab on what is now Scenic Byway 128 and north to visit fellow ranchers near the Book Cliffs. Bill remembers proof of old Native American settlements by discoveries of arrowheads nearby, and at one point during the construction of Interstate 70 an especially unique creature was unearthed:

“…When they built this I-70, just a few years ago, right around Cisco, they were running over a bank, getting some fill dirt or something, and they uncovered a whole mess of pretty good-sized turtles. And they were, of course, they were…what should I say?…they’re made out of rock now (petrified)…And so the lady in Cisco that ran a little lunch counter saved one for my wife. We have it at the ranch. But the head came off but the rest of it is intact. And they’re about, oh, a foot in diameter, a little bigger and a little smaller, but there were lots of them. “Course, broke up or destroyed by the big machinery but they uncovered a whole bagful…” – William “Bill” Cunningham, 1980.

Quite the rare souvenir.

The town of Cisco has went through many different stages in the last 100 years.  Due to the widespread replacement of steam engine locomotives to diesel in the 1950’s, and the 1970’s origination of Interstate 70 bypassing the town, Cisco’s population steadily dwindled from Boom Town to Ghost Town.  In the past few years, a newer resident of the town is bringing inspired life to the area, causing an upswing in visitors through the building of an off-the-grid Airbnb and the creation of an Artist in Residence program.

You can read more about Cisco’s modern-day resurgence in this terrific article featured in High Country News. If you’re interested in listening to more tales from Bill Cunningham and other original settlers of the area, check out the Mesa County Oral History Project.