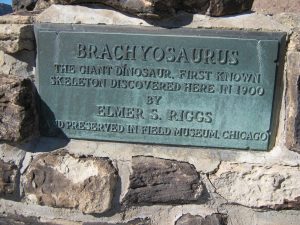 Riggs Hill in the Redlands area of Grand Junction is one such trail.  As described on the detailed sign posted at the beginning of the hike, the fossil remains of a dinosaur named the Brachiosaurus altithorax (deep-chested arm-lizard) were discovered here on July 4, 1900.  This species was previously unknown and and at the time was the largest fossil discovered, making our little corner of the world an esteemed place for paleontology.

Elmer S. Riggs was the man behind the 1900 discovery and for whom this plot of land is named.  A man new to paleontology but with a finger on the pulse of the fossil world (which sounds like an oxymoron), Riggs felt fresh to the game and eager for discovery.  He was put on assignments by the Field Columbian Museum of Chicago in Illinois (now the Field Museum of Natural History) where he worked as a museum curator.  From 1899 to 1901, he made a great deal of discoveries all over the Wyoming and Colorado landscapes, working largely with fossils found through out the Morrison Formation. Riggs decided to visit Grand Junction after receiving a tip from Dr. S.M. Bradbury, a local who worked as a dentist downtown Grand Junction. While digging in the Grand Valley area, he accomplished the victorious Brachiosarus discovery at Riggs Hill, and the fossil remains of the large dinosaur were shipped to Chicago to be housed at the Field Museum. 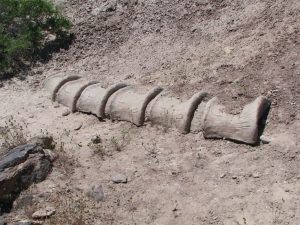 According to expeditionlive.org, the years immediately following Riggs’s early-career abundance of explorations were a bit bleak.  Funding for expeditions provided by the Field Museum steadily vanished and his small paycheck in an up-and-coming profession was undoubtedly stressful. In 1922 life brightened for Riggs as the Field Museum received new funding and he was able to set forth on an exciting and rare expedition to South America.

An article found in the Colorado Historic Newspapers database (available to access for free through Mesa County Libraries!) stated that Riggs’s main goal of his travels south were to encourage definitive proof of Charles Darwin’s theory of evolution:

“Riggs today proposed an expedition to take the trail of prehistoric fossils in South America…That missing links in the long line of descent from the small single-celled amoeba to the twentieth century “superman” are to be found in the ages-old Marsupial remains, is the belief of Riffs and his scientific associates. The expedition, one of five being sent to remote places of the earth by the museum, will seek to establish the relation between ancient animal life in South America and present life in the United States…’I have received fossils of the giant sloth, a native of South America, as far north as Minneapolis,’ he (Riggs) stated…’we believe the missing links exist, and that we can find them.'” – Telluride Daily Journal, April 10, 1922

Riggs unearthed many great fossil discoveries on his South American expeditions, which were added to the Field Museum’s collection.

In the 1980’s, the Riggs Hill property was purchased and continues to be managed today by the Museums of Western Colorado. For a more in-depth look into the background of this area, have a look at this trail brochure offered by the Museum.  Additional bonus of fun – for anyone who enjoys the activity, they’ve recently added two Geocache trails to the site as well!

For more information on the many great men and women of the past who helped shape Mesa County, visit the Mesa County Oral History Project.

*We understand exercise and outdoor time is important for our Mesa County residents, but at this time when social distancing is crucial, please remember to use your discretion on whether or not hiking trails seem too busy to keep it safe. If a parking lot at Riggs Hill or any trailhead looks busy, choosing another time to visit might be best. For great tips on responsible recreation, check out this article from the Colorado Canyons Association. Stay healthy and well!