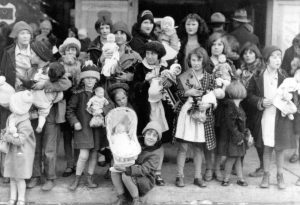 Children stand with gifts they received from the Soup Eaters during the Great Depression. Photo courtesy of the Museums of Western Colorado (click on image to enlarge)

Before The Giving Tree, Toys for Tots, and the other wonderful programs that provide gifts to children in need, there was an organization called The Soup Eaters that helped thousands of Mesa County youth during the holidays.*

The Soup Eaters was founded by Al Look during the Great Depression. Look, a columnist and advertising manager for The Daily Sentinel, received funds from Walter Walker and other local philanthropists to fund the organization. He then made arrangements with department stores on Grand Junction’s Main Street to purchase stock that they had not sold by Christmas Eve. This allowed Look to buy gifts at cost. He and other volunteers went to the stores after closing on Christmas Eve and shopped until the early morning. They shopped with lists in hand, attempting to find a fitting gift for each child.

On Christmas Day, the Soup Eaters held a large event at the Avalon Theater for all the children whose parents had requested help. The kids got to see a movie and celebrate their new gifts. In one of his Mesa County Oral History Project interviews, Look recalled the Avalon being full of nearly 2,000 boisterous children. Children came from throughout Mesa County, from Delta County, and elsewhere.

Look realized that the Soup Eaters had become too big an operation to handle on his own. With encouragement, the Grand Junction Kiwanis took over the project. Within a couple years, they also found the Soup Eaters, and especially the Christmas Day celebration, too large to manage. Thankfully, the Grand Valley now has other organizations, including the Giving Tree (hosted at our very own Mesa County Libraries in collaboration with Catholic Charities), to provide important help for families at Christmastime.

*The term “soup eater” now seems to have a pejorative connotation. I’ve never actually heard anyone use the term, but Urban Dictionary supplies a couple definitions.