Ahh the Wild West.  Tumbleweeds, dry and dusty landscapes, cactus, cowboys chewing on straw and riding horses across the desert…

A less featured but equally important symbol of the American West is that of the cowgirl. Annie Oakley and Lucille Mulhall were two tough women who became nationally known for their lassoing, riding skills and disdain for the normalcy of ladies tea times and sewing circles.  Many similar women lived to work out in the elements tending cattle during these early days of western history. 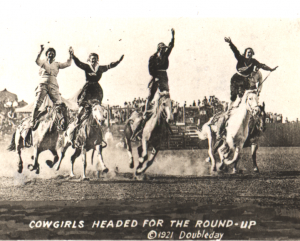 Mesa County Oral History Project interviewee Marie (Becker) Young had her fair share of horseback riding and cattle ranching on their land near the Book Cliffs in the early 1900s. Money was scarce during World War I, and she and her neighbors made due with what they had, working hard to keep their families fed and clothed and their ranching businesses afloat. She raised the cattle and assisted her family by trucking feed, selling the livestock, branding the animals, and at times would oversee the births of calves.  Somedays she would ride 20 or so miles to help round up the herd. Marie even had a go-to recipe for Rocky Mountain Oysters!

Marie was such a spokesperson for the cattle industry that she joined an early group of female supporters called the Colorado Cowbelles in the early 1950s. The group’s main purpose was to encourage folks to eat beef and promote the importance of the cattle industry and ranching.  Marie mostly wore coveralls while working with cattle in her younger years, but in 1958 at age 60 she put on a skirt and became one of the main organizers of another group called the Frontier Belles (the group still exists today).  This group of local Grand Junction women enjoyed escaping their daily routine to ride horses sidesaddle in rodeos and for fun out on the trails.  Her love of riding horses was life long. At one point during her Frontier Belles membership, Marie recalls a special memory of riding next to her daughter and granddaughter.

For books in our catalog featuring other cowgirls of the great American West, click on any of the titles below: 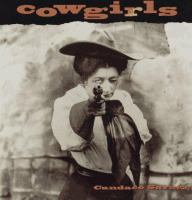 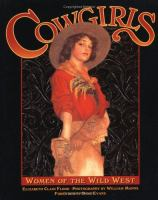