According to the International Dairy Foods Association, ice cream is a commodity that was first documented in America around 1744.  It was originally a treat of the elite, its cool flavors only to be enjoyed by the rich.  Time and technological advances changed this, and eventually everyone could find ice houses stocked with freshly made ice cream to be sold in drug stores and candy shops all over the country.

In early 1900s Mesa County, there were several options for cooling off with multiple scoops of the delicious dessert. 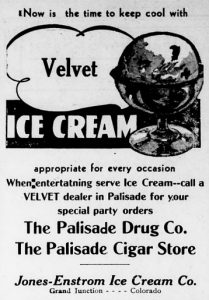 Lutes Candy Kitchen on Main Street in Grand Junction had the potential to be the main ice cream supplier for the whole Western slope. According to a 1904 article in the Daily Sentinel, “Their machinery has a capacity of 100 gallons a day and can easily be doubled should occasion be given.” Operation began in 1904 with Harold Lutes and his son, and the reputation behind the shop was impeccable.  The window displays were said to be a “beauty show”, especially during holiday seasons, attracting crowds of shoppers to the artful scene. The shop even offered an ice cream delivery service! Their success was credited to Lute’s experience in the candy world; a passionate confectioner, he owned a candy shop in Hyde Park in Chicago before moving to Mesa County.

Perhaps one of the more famous ice cream makers in Grand Junction was the Jones-Enstrom Ice Cream Company. When famous toffee-maker Chester “Chet” Enstrom first moved to Grand Junction from Colorado Springs in 1929, he came with extensive knowledge of ice cream production from his studies and previous employment.  Chet joined forces with Harry Jones to sell ice cream all over Mesa County.  As time went on, Jones retired and Enstrom honed his focus on toffee, selling the Jones-Enstrom Ice Cream Company in 1956 over to a local couple.  The couple owned one of the most beloved dairies in the area: Clymer’s Rose Glen Dairy in Orchard Mesa.

Mabelle Clymer and her husband Fred started their dairy operation in 1915, and they used the earliest known adoption of pasteurization in Mesa County. A 1935 Palisade Tribune article stated, “Clymer’s herd, one hundred percent purebred, is the only one in Western Colorado under Federal government, State, and City supervision and it is one of the three outstanding herds in the state of Colorado.” Their herd’s milk was said to make a particularly amazing ice cream, admired and enjoyed by the sweet-toothed masses.

Over in De Beque, Colorado, ice cream was produced in the early 1900s by C.D. Smith Drug Store owner Fred Young. During a Mesa County Oral History Project interview,  Armand De Beque recalled trips to the drug store as a child where Fred had his own power generator to make and sell the ice cream. Fred was, “The only one around who made it, so it was a real treat.” 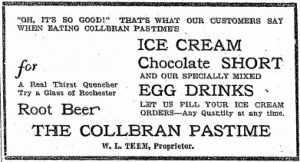