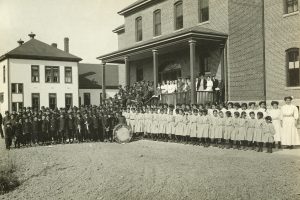 Teller Indian School. Courtesy of the Museums of Western Colorado

With the gruesome discovery of the bodies of First Nations children on the grounds of residential schools in Canada, people are also turning their attention to American Indian schools in the United States. These boarding schools operated in the late 1800’s and 1900’s. They were dedicated to the forced acculturation of Native American children, who were often taken from their homes and made to attend. Mesa County had its own American Indian School. The school’s records were destroyed in a fire in Leavenworth, Kansas, making it difficult to piece together the history of the institute. Thankfully, local history professor Don Mackendrick did just that. This blog follows much of his lecture on the same topic.

The Teller Indian School (later called the Teller Institute, located at 2800 Riverside Parkway) was named after U.S. Senator Henry Teller of Colorado, who was instrumental in passing legislation for the creation of the school in 1886. The first students arrived in 1887. The school followed the philosophy of Colonel Richard Henry Pratt, founder of the Carlyle School in Pennsylvania. He believed that Indian children must be removed from their families and culture and immersed in Western Civilization. The Carlyle motto was “kill the Indian to save the man.”

“The whole purpose was to destroy the Indian culture. These children were to go home after five years at the school completely indoctrinated in white man’s ways. Now at that time, the whole philosophy of the Indian education was based on this assumption that the Indian just had to be Americanized. This meant the destruction of his culture and the inculcating of the white culture in the mind of the Indian. If you didn’t do this, according to the Indian educators, they would probably all be killed. So it was either this or that. Either you saved the human being and destroyed the culture or the culture would continue to operate and probably the human being would be destroyed” (Mackendrick).

Raphael Lemkin, who coined the word “genocide,” recognized the intentional destruction of a people’s language and culture as a stage of genocide.

The Teller Institute had a difficult time recruiting students. Recruiters went to the Uintah Reservation, but the Utes refused to send their children to the school. According to Mackendrick’s research, recruiters resorted to “hogtying” students and bringing them to the school. But when inspectors came to the school, they found that many of the students were fully grown, leading one to muse whether it was actually a school, or just a boarding house. The operators of the school gave up on the Utes and instead enrolled Native Americans from Arizona and Nevada.

The Teller Institute was conceptualized as a farming school, but the drainage on the land was poor and the alkali proved to be so pervasive that the soil would not grow many crops. The school abandoned agriculture and became a dairy operation. It also trained children in the trades, including carpentry, leather crafts, saddle making, shoe and boot making, and sewing. Male students stayed with white families in the area and helped with farming. Such students were used especially for sugar beet farming.

Students were supposed to be paid for their labors and the school superintendent was supposed to “take care” of their money for them while they were in school, but when an inspector looked at the books in the 1890’s, it was found that the superintendent, Y.G. Lemon, had used the money for his own purposes. The money was nowhere to be found. Despite the resulting scandal, Lemon was kept in the position for another five years.

Children were forbidden to speak their native languages and were taught English. Children who spoke their native tongues were beaten and so often ran away. It was illegal for students to run away. They were chased down and forced back to the school.

Like many Indian schools, the Teller Institute had sports teams, a band, and a newspaper. The Teller school specialized in baseball and played teams from all over the Western Slope. The team was good and often dominated competition. The school also had an excellent band. It toured and competed in Colorado and Utah, and often brought home awards.

The school had problems with both sewage and drinking water. No sewage system existed at the school and so administrators dug several cesspools to deal with waste. A few years before the school closed, the school was hooked up to Grand Junction’s new sewer system. The water table was very close to topsoil and filled with lye. Students complained of stomach pain from drinking the water. Administrators were forced to contract with a private water company for drinking water.

According to Professor Mackendrick, the Teller Institute functioned more as a pork barrel project for local interests, including farmers that relied on Indian students for farm labor and as servants, than as a successful educational venture. In the early 1900’s, the Federal government discovered that many such schools were unsuccessful, because white businesses would not hire even acculturated Indians. Such school were also expensive to run. The school and grounds were transferred to the State of Colorado in 1911. The state transferred all of its students immediately and the school was closed.

For information on the Teller Institute, listen to Don Mackendrick’s lecture. Find other local information in the Mesa County Oral History Project.