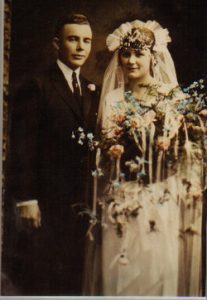 Beginning tomorrow on First Friday, the Art Center of Western Colorado will host a new exhibit titled Alfred Nestler: The Power of the Pen: An Exhibition from The Art Center’s Permanent Collection. In honor of this showing, we explore the life of Nestler, an artist who got his start in Grand Junction before becoming part of Sedona’s nascent art scene in the 1950’s.

Alfred Louis Gustav Nestler was born in Missouri to Lewis Gotthilf Nestler and Anna Marie (Henschke) Nestler in 1899. US Census records show that his father was a painter (presumably a house painter). His mother was a German immigrant and homemaker. According to the 1920 US Census, Nestler was already following in his father’s footsteps as a painter by the age of 19.

Alfred married Francis Marie Viets in 1923. Census records show that they lived in Grand Junction by at least 1930. There, Nestler worked first for the Fremont Wall Paper and Paint Store as an artistic decorator, and then for his own company, Nestler Interiors, as an interior designer.

According to local historian David Sundal in his interview with the artist Cecilia Cardman, Nestler worked not only as an interior designer but as a house painter and a furniture refinisher. He also worked hard on his own fine arts painting, painting landscapes in oils and making ink drawings.

He helped further the arts community in town through his involvement. With Harold Bryant, Esther Reed, D.D. Sims, and Archie Bliss, he established the Beaux Arts Club, which met in the 1920’s. After the disbandment of the Beaux Arts Club during the Great Depression, he helped establish the Brush and Palette Club, a possible forerunner of the Arts Center.

After the passing of his wife, Nestler seems to have remarried and built his own adobe home in the Mantey Heights neighborhood, but then moved shortly after to Sedona, where his granddaughter recalls that he established La Galaria during the 1950’s (see Find a Grave entry for Alfred Nestler). In 1960, he published the book Color and Composition, part of the Walter Foster Art series.

Mesa County Libraries owns the Nestler painting Willow Lake, which can be viewed on our website and in-person in the Central Library’s Study Room A. The Art Center also owns a collection of Nestler’s work, including the paintings After Glow, Junipero, and Path to the Sea.

To learn more about Nestler’s art, visit the Art Center. To learn more about the life of Cecilia Cardman, another artist from Grand Junction who found success away from home (New York City), listen to her interview with the Mesa County Oral History Project (MCOHP). Find out more about nationally-known artist Harold Bryant in the MCOHP, or check out the book Harold Bryant: Colorado’s Maverick with a Paint Brush by Al Look.