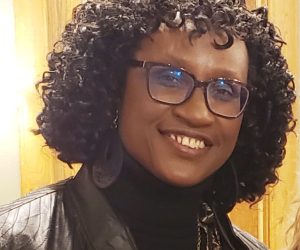 As a former sheriff’s deputy and an African-American woman involved with community and educational efforts through Black Citizens and Friends, Janielle Westermire has a unique and very personal perspective on race relations, and on the Black Lives Matter protests that gripped the United States following the 2020 death of George Floyd.

In her interview with the Social Justice Archive  at Mesa County Libraries, Miss Westermire discusses her unique perspective on social justice protests in America, one informed by a respect for law enforcement, but also by racism she has experienced.

Miss Westermire also talks about growing up around the Handy Chapel and about her father, Harry Butler. Butler was a minister, Grand Junction’s first African-American city council member, and the first Black member of the Mesa County Valley School District 51 board. She reflects on the courage and strength that Mr. Butler demonstrated in life and that he bestowed in her. She also talks about the love and understanding with which she tried to approach the prisoners she worked with as a deputy in the Mesa County Jail, regardless of race. Fostering love and understanding through dialogue remains her guiding philosophy in life, and makes her interview an important one for understanding and improving race relations in Grand Junction and beyond.

Listen to Janielle Westermire’s interview and the other interviews in the Social Justice Archive.