He crawled in an occupied bear den for fun, cared for thousands of sheep, and helped build Rim Rock Drive on the Colorado National Monument. This week’s early Mesa County settler spotlight is on Kenneth Thompson! Kenneth saw a great deal during his days of early Mesa County living, all spoken upon during his 1977 Mesa County Oral History Project interview. 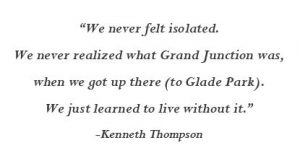 Born in 1908, he moved to the peacefully secluded land of Glade Park in 1917 at the age of nine with his family to start anew, farming and living off the land. Kenneth described the first few years of his life on Glade Park as rough.  His father passed in 1919 and left himself and his older brother to tend to the responsibilities of the homestead.  The two boys hand-pulled massive amounts of sagebrush from their land and planted Bumblebee Corn, a shorter variety of corn with husks described as “little nubbins”. They grew enough corn to raise and feed pigs and help provide food for horses throughout the winter.

When Kenneth turned a spirited young age of 14, he was “put out” on a sheep camp to herd the flocks.  He lived as a sheepherder for nine or ten years, and spoke of a time when he had up to 1,000 head of sheep under his watchful eye.

The sheepherding gig instilled within Kenneth a hardworking mentality, for in his 20’s he took a job working with the Conservation Civilian Corps on the Colorado National Monument building Rim Rock Drive.  He drove trucks (a Diamond T and a Model A) and worked breaking up, loading, and dumping rocks to create space for the roadway.  He was stationed at two camps, one down at the bottom of the Monument in Fruita and one on top where the National Park Service Visitor Center is located today. During this time he experienced beautiful scenery, tough work, lousy bosses, harsh weather conditions, and a nasty leg wound that was improperly stitched up at camp with gauze left inside of it, causing a bad infection (ain’t modern medicine great?). 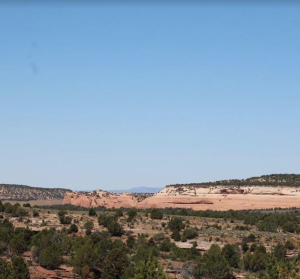 During the majority of Kenneth’s interview with the Mesa County Oral History Project, he slowly and articulately explains what day to day life was like on Glade Park growing up. His family would only take the arduous three-day journey to Grand Junction, Colorado two or three times a year by horse and buggy.  They traveled on a burdensome dirt dugway, now the nicely paved Little Park Road east of the Glade Park Store. Kenneth’s family bought necessities in bulk such as 100 pounds of sugar and traded grain for sacks of flour from the old Mesa Flour Mill Company on south 7th Street.

Kenneth recalls Glade Park town dances held at Coates Creek School and sometimes outdoors at the head of canyons where bootlegged liquor seemed to always appear and music was provided by french harp, a dishpan, and the violin.   They hunted whatever animals resided around the area including bears, which were extremely common and caused a great deal of trouble for sheepherders.  One rifle hunting expedition with the original owner of the Glade Park Store, Unk Laurence, involved Kenneth heroically (?) poking his head inside a bear den to investigate.  It did not end well for the hibernating bear – Kenneth still had the bear skin hanging on his wall into the late 1970s.

Kenneth, like so many other Mesa County Oral History Project interviewees, has a plethora of stories that will surprise you, impress you, and make you simultaneously yearn for the past while smiling gratefully towards the ways of the present.