If you’ve spent time browsing through the Mesa County Oral History Project interviews, you’ll notice two common occupations worked by women settlers: nurses and teachers.  As we’ve seen through the tireless, incredible efforts of our healthcare professionals and teachers during this past year, positions like this are crucial for the well-being of a community. 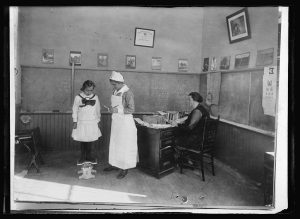 One nurse who made many contributions to the public health sector in the early 1900s Mesa County was Evelyn Lee (Foster) Beatty.  Born in 1908, Evelyn was ill very often as a child.  Her poor health experiences propelled her to go into nursing, and she graduated in 1935 from the University of Colorado with a nursing degree.  In that same year, the Social Security Act passed in Colorado and much of the money from these new benefits enabled an increase in training health personnel.  With the help of that funding, Evelyn was chosen to fly out to California to receive a “crash course” in public health training. She and 26 other nurses had their tuition paid for, and received a $150 monthly stipend for room and board.

In the late 1930s, Evelyn returned to Colorado with a new public health education, got married, and started a nursing job in Mesa County.  She described getting hired as quite difficult; in those days society frowned upon hiring married women. During that time, the only public health nurses were on the east side of the state in Denver and Colorado Springs. Mesa County was a bit behind. While working as a school nurse, Evelyn began to recognize the strong need for public health nurses on the west side of the state. The job allowed her a behind-the-scenes look at the poor conditions children were living in, causing a high number of cases of lice, impetigo, and other illnesses.  She recalled follow-up visits to La Colonia, a settlement of adobe homes where the school children of migrant workers lived behind the old Holly Sugar Factory on 11th and Kimball.  During these visits Evelyn taught the kids how to wash their hands properly and use soap to stop from spreading germs.

Evelyn knew the community needed public health education and resources, but citizens were complacent on its importance. It became her mission to escalate attention towards public health to help stop the spread of preventable illness.  She used her many contacts in town to begin a campaign in hopes to share knowledge and to ramp up interest.  As a school nurse, Evelyn was able to form alliances with several influential groups in town, including the PTA (Parent Teacher Association), the Grand Junction Women’s Club, and city council members.  She arranged help from outside the county, working with the State Health Department to prepare a public health slideshow to be shown at a public meeting.

Evelyn’s education and hard work paid off, and the Mesa County Public Health Department became official in 1948. The department was responsible for functions involving tuberculosis, school nursing, maternal and child health, and mental health services. The following year, a laboratory was set up in Mesa County to house milk and water sanitization tests, as well as help conduct food and meat testing.

Evelyn worked in the public health sector for many years, and throughout her long career she was continually aided by one huge player: the Tuberculosis Association contributed a great deal of funding towards proper pay for public health workers. The terrible number of tuberculosis (TB) cases ravaging the country from the 1800s into the 1900s deemed Colorado as one of the most healing places in the country for its abundance of sunshine, clean air and water, and high altitude.  The altitude was thought to be especially important to help those suffering from TB (also called the “White Plague”) because it stopped bacteria from moving as rapidly through the lungs. It is estimated that 60% of people who moved to Colorado in 1925 came because of TB.  In the 1950s the Tuberculosis Association paid for Evelyn to become a traveling nurse to aid TB nursing and care in the surrounding counties of Delta, Montrose,  Ouray, and San Miguel, where support for TB patients (and nursing in general) was seldom provided.

In Evelyn’s words on public health, “It’s been fun and a lot of hard work, but you don’t get anything accomplished without a little work.” Click here to listen to her full interview with the Mesa County Oral History Project.