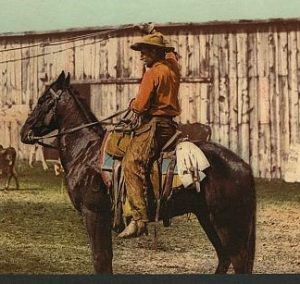 According to Muriel Marshall in her history of the Uncompahgre, cowboy and probable horse rustler Ben Lowe may once have ridden his horse into the John Davis clothing store on Grand Junction’s Main Street during one of his “Shoot up Main” weekends. Marks on the floor from the horse were reportedly visible in the clothing store for many years.

Of course, we are all familiar with the story of Bucky, the Neutered, Tame Deer of Atchee (and later Glade Park). He would climb onto porches, go into homes, and eat food right off the table, until he frightened the resident of a cabin and met his untimely demise.

And who can forget game warden John Hart Duncan’s tale of the bear cubs who lived in a Grand Junction brothel and a Ouray mortuary? One cub played (and probably destroyed) a piano in the waiting room and one disrupted a funeral. You can probably guess which bear was which.

We can now add to these tales of unorthodox animals inside. Upon moving onto a homestead in East Orchard Mesa in 1904, Welsh immigrant Elizabeth (Williams) Reese was dismayed to find that she had left a comfortable home in Scranton, Pennsylvania for a one-room shack. Her husband Thomas Reese, also from Wales, had persuaded the family to move to the West because doctors saw the drier air as a possible cure for his Black Lung disease.

That first night on the homestead, Elizabeth was equally distraught when a hard storm set in. One of their mares was pregnant and set to foal at any time. The family apparently had not yet built a barn and Elizabeth, a nurse, could not stand the idea of the animal out in the wind and rain all night.

So, she brought the horse into the one-room cabin. Daughter and oral history interviewee Ann (Reese) Stokes reports that the horse neighed and stomped the floor all night and no one got any sleep, but at least the mare and foal were safe.

Listen to Ann Stokes oral history interview about the settlement of East Orchard Mesa and the history of Palisade, or find other stories in the Mesa County Oral History Project.